Contributions to the Community

The Town Hall Board has been active in the community since restoring the Hall in 1976. Over the years they have:

The historic Glen Williams Town Hall is an active integral part of village life. The board’s efforts have improved the quality of life for citizens of Glen Williams of all ages and for visitors from other places like Georgetown.

The Glen Williams Town Hall is located at 1 Prince Street, Glen Williams, Town of Halton Hills. The property is identified as Lot 65 on the Plan of the Village of Glen Williams with a frontage of 40 feet and a depth of 50 feet, occupying 0.05 acres.

Drinking in the Glen!

The story of the Glen Williams Town Hall begins with intoxicating spirits and the desire of villagers to save their neighbours from their own folly. A Glen Williams temperance society was formed, known as Royal Oak Temple No. 552. A visiting lecturer in 1869 wrote, “I have also had the pleasure of meeting with the Temple at Glen Williams, which is said to be the best in the county, and enjoying the noble hospitality of its members. It would be difficult to find a more zealous and active membership than this Temple has the advantage of and the result is good progress and a noble work…” This group probably met in the schoolhouse on Prince Street, the only large room in the village. 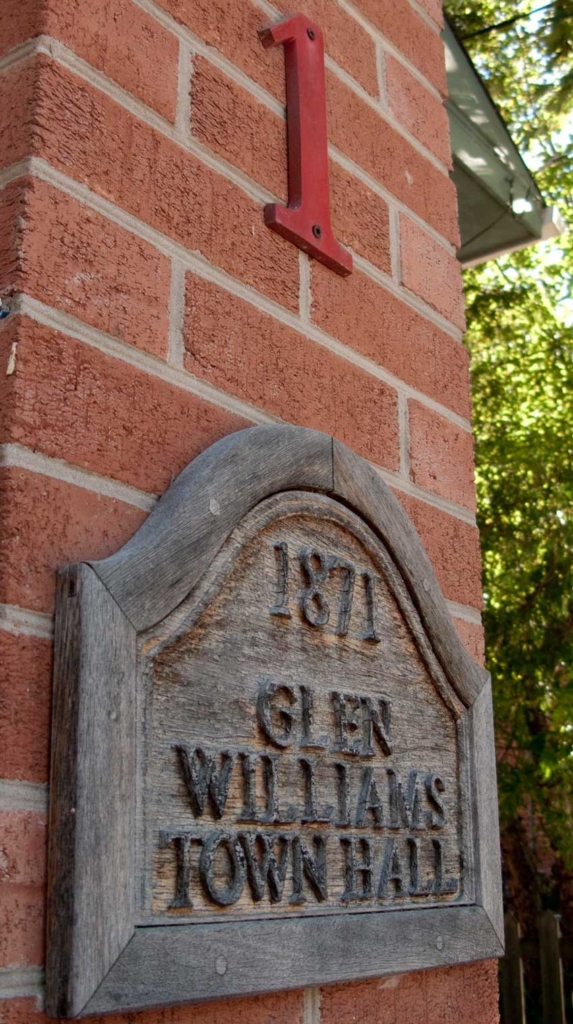 The Temperance Society Gets a Place to Meet

The Glen Williams Temperance Society wanted to stop the flow of liquor so they approached Charles Williams for a piece of land for a community hall which they could also use for meetings. A meeting of community leaders was held in March 1870 at the home of Charles Williams where it was decided a Town Hall was a desirable objective. Attending the meeting were Joseph Tweedle, Benajah Williams, John Murray, John Hunt and William Tost. At the April meeting the site was chosen as “along side of the Brick Store and Mr. Tost’s Blacksmith shop.” It was also decided that “the Hall be built of brick thirty-five feet wide, fifty feet long and the walls fifteen feet high.” Charles Williams deeded the land to the first nine trustees to held in trust for the community.

In May 1870, the Good Templars of Royal Oak Temple (Glen Williams) attended a meeting and requested the privilege of having all their meetings in this Hall for the donation of $200 towards the building project. The building committee agreed, especially since the Templars representative was R. S. McCrea, shopkeeper in the adjoining general store.

After considerable discussion a contract was given in June 1870 to Walter McKay of Georgetown to build a brick hall 28×44 feet, being 15 feet high for $1000.

The red brick hall was opened on May 24th, 1871 with a patriotic concert in honour of the Queen’s birthday. The hall had wooden floor with a stove at the centre near the back. The front had a long raised stage, also of wood construction.

The first request came in August 1871 when the Wesleyan Methodist Church requested use of the Hall for services on every second Sunday afternoon and the Sabbath School would use it alternate Sundays. This was granted as long as they paid to have chairs made.

Rentals began in 1873 when the Trustees had two requests – one from the Glen Band for practices and concerts and one from the English Church (Anglican) for divine services. The price was fixed at $24 per annum, if they provided their own light and fuel! A daily rate of $2 was fixed, with out fuel or light. 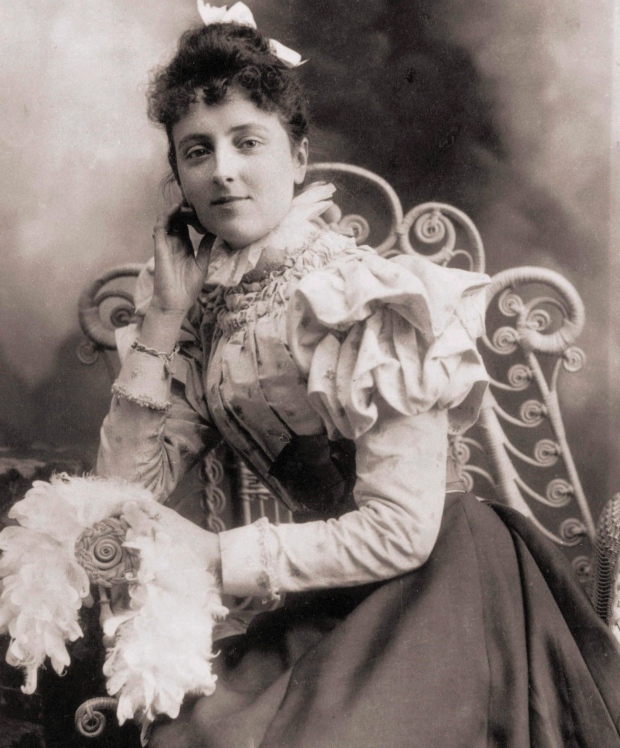 As trustees resigned or died, they were replaced by another Glen resident. They met as needed, often three times a year. The Hall was always busy. Besides the Temperance Society, the band and two churches, political meetings were held as needed and this was the polling station for all elections. Fraternal workers associations and the Loyal Orange Lodge met here. Christmas concerts from the school, recitations and music recitals became regular features. Even traveling medicine shows with a live bear and fiery preachers used the stage to good effect. With the advent of electricity, hydro bills could be paid here monthly. In the 20th century, dances were introduced with live bands playing on the stage. Lucy Maud Montgomery staged many works here with her Union Dramatic Players.

The Era of Education & Teen Dances

In 1949, the school house bell tower collapsed when a new addition was being constructed. Classes opened in the Town Hall in September. After such extensive use for decades, the Hall was in bad shape. In 1953, the Board was offered $1000 for the property, which would be demolished. The offer was rejected. In September 1953, the Hall was leased to the Board of Education, effectively ending its service as a community hall. The Hall Board held informal meetings thereafter. Clayton Allen, who joined the board in 1953, became the caretaker of the place. When the school finished with the place, it was used returned to the community for a time.
Teenage dances under the auspices of St. Alban’s were held with a live band and DJ, while the United Church held bake and rummage sales. The need for repairs prompted the trustees to lease the hall out for furniture storage. On 1 January 1974, Esquesing Township (which included Glen Williams) was absorbed by the Town of Halton Hills.

Big Repairs and Just $86 in the Bank

Local residents were worried that the “town hall” belonged to the new Corporation. People got together and clarified ownership and a village meeting was held to discuss the future of the Hall. Trustees present included Clayton Allen, Ray Addy, Fred Engleby, Una Wheeler and John Wagstaffe. They outlined the problems: crumbling back wall, rotting floor, sagging ceiling, no water or septic, leaking roof and a bank balance of $86. A renovation committee was struck with Cy Waters as chairman and included Nancy Waters, Lorraine and Richard Nowina, Ellen Russell, Sheila Willis, Pat and Bob Harrington, Campbell and Ann Blair, Una Wheeler, Red Cuthbert, Joan Brown, Alex Ashenhurst, Betty Allen and Cathy Bouskill.
Local residents rallied to restore the Hall, and a federal grant of $13 500 was received under the Opportunities for Youth programme. Fundraisers were held and volunteer labour abounded to restore the facility.

Wave Goodbye to the Outhouses!

The back wall was rebuilt and the old brick was repointed. The outhouses and cloak room at the front of the building were removed. The interior was gutted and dry-walled with a balcony being added at the far end. The floor was removed and the ground excavated to pour a concrete cistern and septic tank, the top of which formed the new floor of the Hall. Rain run-off filled the cistern and a pump with an ultra-violet filter provided water for the small kitchen and toilets.

The Town Hall Board decided to thank the village for their support by sponsoring Dominion Day celebrations on July 1st, 1976 which included the official re-opening of the Hall. The Glen Williams Town Hall consisted of every member of the village at this point. Meetings were held in a “New England” town hall style with every resident attending the meeting having a vote.

In 1981, it was decided to incorporate the Hall for insurance purposes. In true village style much of the legal work was donated. The Glen Williams Town Hall Inc. was incorporated on 12 November 1981 in the Province of Ontario. This formalized the structure of the trustees. The model set forth in the deed drawn up by Charles Williams in 1871 was restored. Annual elections are held today to select the nine trustees who administer the Hall. They are the legal owners of the Hall for the term of their office. The Hall achieved charitable status in 1983, principally to issue donation receipts in connection with their on-going commitment to run Canada Day every year.

Besides the Canada Day celebrations, which include the Duck Race, nine trustees rent the hall out, sponsor coffee houses, a Children’s Christmas party, a senior’s monthly lunch and Canada Day festivities for all. 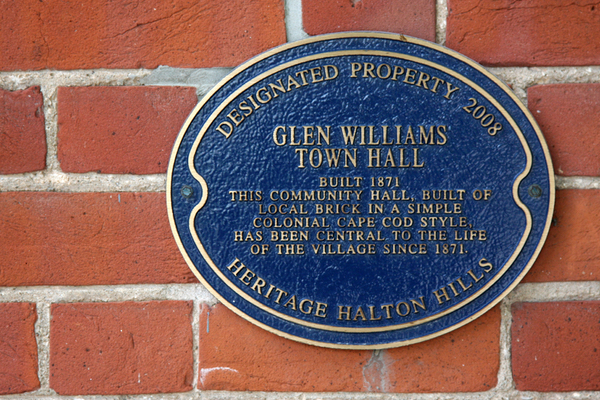 The simplicity of the Glen Williams Town Hall is the beauty worth preserving. The hand-pressed red clay brick was made just north of the village into a small brick measuring about 8.5” by 2.5”. The bricks are laid in a Flemish bond pattern, which is alternating headers and stretchers on each course. An alternating header and stretcher are used as the pattern for the brick header over each window. The windows are large double hung windows with nine panes of glass divided by wooden muntins within each sash. Each window sits on a heavy wooden sill being a full two inches thick. The front doors are two wooden doors measuring three feet wide by eight feet high. These doors are protected by the brick vestibule built on the front of the original building. The roof is pitched front gabled of wood frame with asphalt shingles. A gable return dresses up the gable end of red brick. The barge board is undecorated. The vestibule, added about 1981, compliments the existing features and any future changes should retain this style.

The Glen Williams Town Hall has an exterior made of local hand- pressed red clay brick, erected in 1870-71 by Georgetown builder Walter McKay. It has served the community in various capacities continuously from 1871.

The Glen Williams Town Hall is a typical example of a village community hall built of local brick in a colonial Cape Cod style. Its’ architectural features are the Flemish bond brick pattern, the double hung multi-paned windows and two large wooden entry doors. The hall has been central to the history of the Village of Glen Williams from its opening in 1871, being associated especially with Canadian author Lucy Maud Montgomery.

The Glen Williams Town Hall has been the centre of Village life since its opening. It has served the village socially, educationally, politically, religiously and in short in every possible capacity a community hall could be used for.