What do retail giant Timothy Eaton, the Group of Seven’s A.J. Casson, and beloved author Lucy Maude Montgomery have in common?

They all have a connection to Glen Williams!

Lucy Maude Montgomery, or Maud Macdonald as she was also known in Ontario, loved the house at 25 Mountain Street in Glen Williams, Ontario, owned by Ernest and Ida Barraclough.

The Barracloughs, a power-couple of Union Presbyterian Church, hosted the Macdonalds – Maud, Ewan and Stuart – for a few nights at their gracious home before the family moved into their new manse in Norval. Union and Norval Presbyterian Churches and the manse were part of the two-point charge to which Rev. Ewan Macdonald had been called. Ida became one of Maud’s close friends in the parish.

During her Norval years, Lucy Maud Montgomery was very fond of Glen Williams. She staged several performances at the Glen Williams Town Hall with her Union Players.

In 1853 – soon after arriving in Canada – Timothy Eaton found his first job as a junior clerk in the Frazier Shop, a general store in Glen Williams. This building is now Reeve and Clark Fine and Rare Books. Timothy went on to found the legendary T. Eaton & Company Ltd. retail empire in 1869.

Mr. Casson used to come out to the Glen on weekends and stay at my grandmother’s home on Confederation Street but never lived here. His daughter did board at my aunt and uncle’s home on the tenth line at one time.
–  Brett Giles, Glen Williams

Did you know the street scene depicted in A.J. Casson’s large oil canvas by the Group of Seven artist is looking northward at Main St. and Joseph St? All of the houses in the painting are still there.

The painting was done circa 1938 and Canadian art critic and historian Paul Duval wrote in 1980 that Street in Glen Williams is unquestionably Casson’s key autumn portrait. It was sold in 2010 at Joyner Waddington’s Spring Auction of Important Canadian Art in Toronto for a record price of $542,800.

Joyner Vice-President Rob Cowley said it wasn’t known what street in Glen Williams was depicted in the painting, but Glen Williams residents certainly do. Check out the photo to the right and compare it to the artwork above.

Casson’s “Village Street October” was painted at the corner of Tweedle Street and Forster Street in Glen Williams (photo by J.M. Rowe).

A superb watercolourist, Casson (together with Carmichael and F.H. Brigden), founded the Canadian Society of Painters in Water Colour in 1925. The following year, he accepted an invitation from Carmichael to join the Group of Seven.

Casson was the Group of Seven’s youngest member. He died at the age of ninety-four, and is buried alongside other Group members in the cemetery on the McMichael grounds. 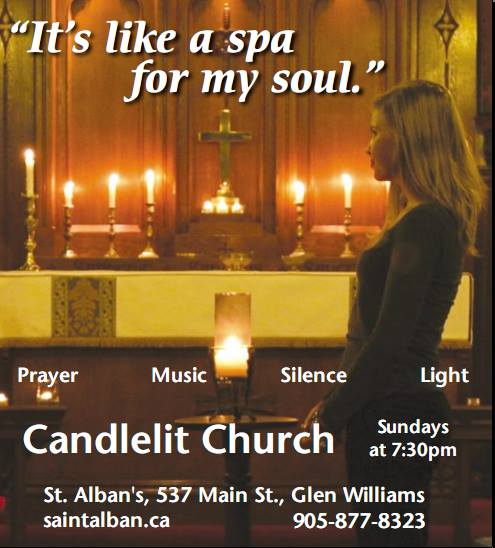 Sign up to get news featuring upcoming events delivered straight to your inbox.